Save “One Life To Live” and “All My Children”

Rumors have abounded for weeks….no make that months…that ABC was cancelling One Life To Live or All My Children or….maybe both!

There have also been rumors that ABC will merge the two soaps together!!

Maybe not so much.

We’re not exactly sure WHAT’s going on.

But we’ve heard through very good sources that both soaps are potentially on the chopping block.

We’ve also heard that a decision will come down next month.

Apart from whether you are loving or hating what is going on storyline-wise right now on both soaps (thumbs down for me, but that’s for another day), the thing is that we all, as soap fans, love the genre.

And what we really DON’T want is to have any more soaps cancelled!

So here’s what you need to do. Call, write or e-mail Anne Sweeney. Apparently, she’s the decision maker. Her contact info is listed below.

So what are you waiting for???

Let the barrage of correspondence begin!!

[Note: This article was originally published in the Palm Beach Daily News]

While being a caregiver to her elderly parents, actress Tina Sloan set out to write a book about the experience.

But as she was writing, Sloan happened to look down at her feet.

“I was in black flats, and I realized they were a mess,” Sloan said. “They weren’t brand-new sexy ones. They were scuffed, dreadful looking … the kind with thick bottoms. But they were comfortable. And I thought, ‘What happened to those beautiful shoes I used to wear?’ I was looking at my shoes and thinking, ‘Whoa! Something’s got to change.’ ”

Changing Shoes — the name of her book and her one-woman play — is a metaphor for life changes.

Changing Shoes: Getting Older — NOT OLD — with Style, Humor, and Grace, was published September 2010 by Gotham Books/Penguin Group. 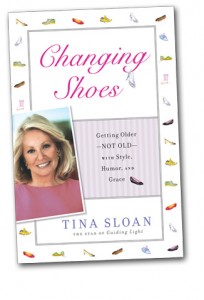 Sloan will hold a book party (reading and signing) from 3 to 5 p.m. Thursday at Tory Burch’s Worth Avenue store.

“We are happy to host Tina Sloan’s book reading at our Palm Beach boutique,” said Tory Burch. “We love her outlook on living life to the fullest in her new book Changing Shoes.”

Sloan’s play will run March 17-18 at the Lyric Theater in Stuart and on March 20 at the Maltz Jupiter Theater. She lives in New York City and Hobe Sound. 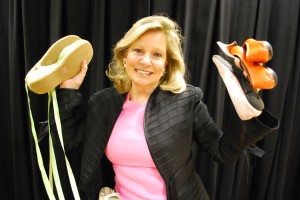 The book is about transformation, reinvention and the many evolutions that happen throughout life in order to stay competitive.

Evolutions
Sloan, 68, knows a thing or two about staying “in the game” from her 26-year stint as nurse Lillian Raines on the long-running soap opera Guiding Light.

She has a long list of television and feature films to her credit. She has acted in two popular web-based series: “Empire” and “Venice.”

She also had a role in the Oscar-nominated Black Swan, as well as two other 2010 movies Happy New Year and Oh My Love.

In her personal life, Sloan has been married to Steve McPherson for 35 years. They have one son, Renny, a Harvard University graduate who served as a captain in the Marine Corps. Sloan has run several marathons and has climbed to the summit of Mt. Kilimanjaro.

A quick read
Changing Shoes is a quick read, mainly because she writes in a conversational, no-holds-barred style.

Whether Sloan is describing what it’s like getting older in the soap biz to the depression she experienced as her parents’ caregiver to her only son being deployed to Iraq to running her first marathon in Paris, Sloan makes you care enough to keep reading all the way to the end.

The chapter describing her mother’s descent into dementia and her father’s battle with cancer is especially poignant.

Sloan opens up and tells it like it is — the good, the bad and the aging.

Eschewing surgery
Sloan candidly states that she made the decision years ago that plastic surgery was not for her. Teeth whitening? Yes. But that’s it.

Sitting in a makeup chair next to Jodie Foster on the set of the film The Brave One, Sloan describes the conversation.

The make-up artist remarked that she was “surprised and impressed” that Sloan never had any plastic surgery. When Sloan answered that she wasn’t going to have any, Foster said, “Tina, thank God there are women like you out in front for the rest of us.”

The book opens with Sloan and her soap opera daughter, Beth Chamberlin, walking down 44th Street in Manhattan wearing their designer ballgowns fresh off the Guiding Light set.

When they go into a nearby coffee shop, a startling revelation hit Sloan: No one was looking at her. All eyes were on Chamberlin. Sloan felt invisible, which is devastating to a woman, but especially to an actress.

It was in those ensuing days, months and years that Sloan decided there was no way to avoid aging, but there is a way to still retain that spark and zest of younger days.

“You just have to change your shoes,” she said.

Sloan appeared in the Woody Allen films Celebrity and The Curse of the Jade Scorpion. Other feature film credits include Changing Lanes with Ben Affleck, The Guru with Marisa Tomei and People I Know with Al Pacino.

‘Perfect storm’
Sloan said she began the book so that Baby Boomers would know what preparations they’ll need in place — such as wills, medical care and long-term care — for their older years. But the book grew into so much more.

“I realized my body was falling apart,” she said. “I was gaining weight. I was being diminished on the show. My son was going off to Iraq. I couldn’t sleep. I was going through menopause, and I just kept writing and writing. It all came about in a perfect storm.”

Okay, so I’m really behind on blogging…I know. I know!

But now, in one fell swoop, I will catch you up on some soap opera buzz….Let’s begin, shall we?

First of all, the return of Rebecca Herbst and her beloved character, Elizabeth Webber to General Hospital is HUGE! 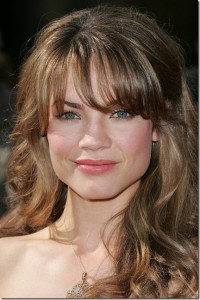 And all of Herbst’s fans out there should be patting themselves on the back for the incredible outcry that I think helped put her back in Port Charles.

Below is a portion of the ABC network’s statement:
“The show is thrilled she will remain on the canvas to portray the beloved character in many more poignant and emotional stories. Fans will be pleased to see Rebecca continue the role she created.”

I don’t know if you’ve seen Paula’s blog – over at Paula’s Soapbox – about the power of the fans in bringing Herbst back onto the canvas. But it’s a good read.

Click here to read Paula’s Soapbox blog “Just When You Thought She Was Out.”

Speaking of Paula, she’s been quite prolific in her blogging recently (certainly putting me to shame).

And if you didn’t know it, Paula was the one who predicted that it was Suzanne who chopped up Brenda’s wedding dress AND that she was somehow connected to The Balkan – BOTH of which came true! 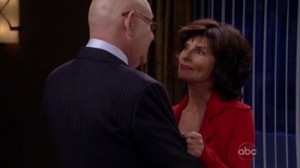 Now, she takes it a step further in discussing the possibilities of what may or may not have happened to Brenda’s baby .

And while you’re on Paula’s site, she has two Days Of Our Lives blogs that you’ll want to read.

Taylor Made: DOOL discusses the switcheroo Days made with the role of Taylor, which was played by Natalia Livingston (Emily/GH) for about five minutes before the show announced recasting Tamara Braun (Carly/GH, Ava/DOOL, Reese/AMC) in the role.

Paula’s latest Days blog is Who Does #2 Work For? Not Me! : DOOL which describes her updated feelings about Rafe #2.

Soapbox1 by Michele Dargan is powered by WordPress and the free Bloxy Two theme.